It’s time for the second in the series of our South Downs Secure Car Stories. In this post, we feature the talented Grant Williams and his legendary car BUY1. 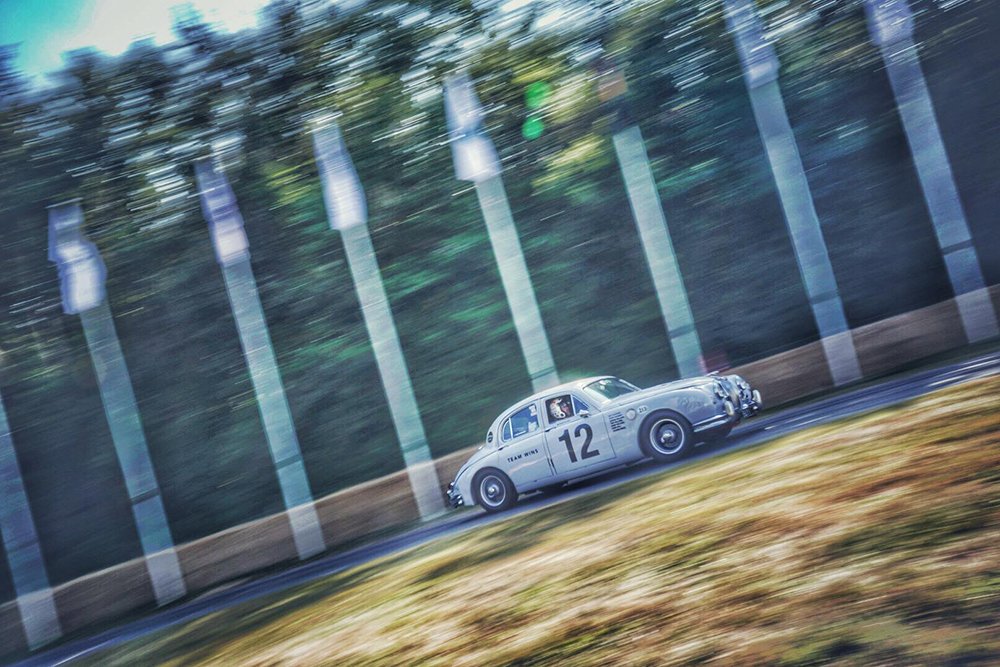 Where it all began:

Twenty-one years ago, Grant Williams took part in what he still considers to be the most exciting race of his career. It had been a weekend of high winds and torrential rain at the Goodwood Revival. But that was never going to deter a keen as mustard twenty-one-year-old in his first outing at the legendary track, competing for the St Mary’s Trophy. He started fifteenth on the grid. But by the time he reached Fordwater, he had fishtailed his way to first place; eyeballing the late, great Gerry Marshall on the way. While Grant didn’t triumph on that particular occasion, Gerry Marshall still took the win, that didn’t deter the after-race chatter about the new kid on the block. Grant knew this was the start of something special. These days both Grant and the very same car he drove on that occasion, the iconic MK1 Jaguar, BUY1, are considered part of Goodwood’s history. Over the last two decades, Grant has clocked up twelve top-three finishes at Revival. And BUY1 has taken the accolade for the most photographed car at Goodwood. So, it seems appropriate that we include both Grant and BUY1 in our series of Car Stories. 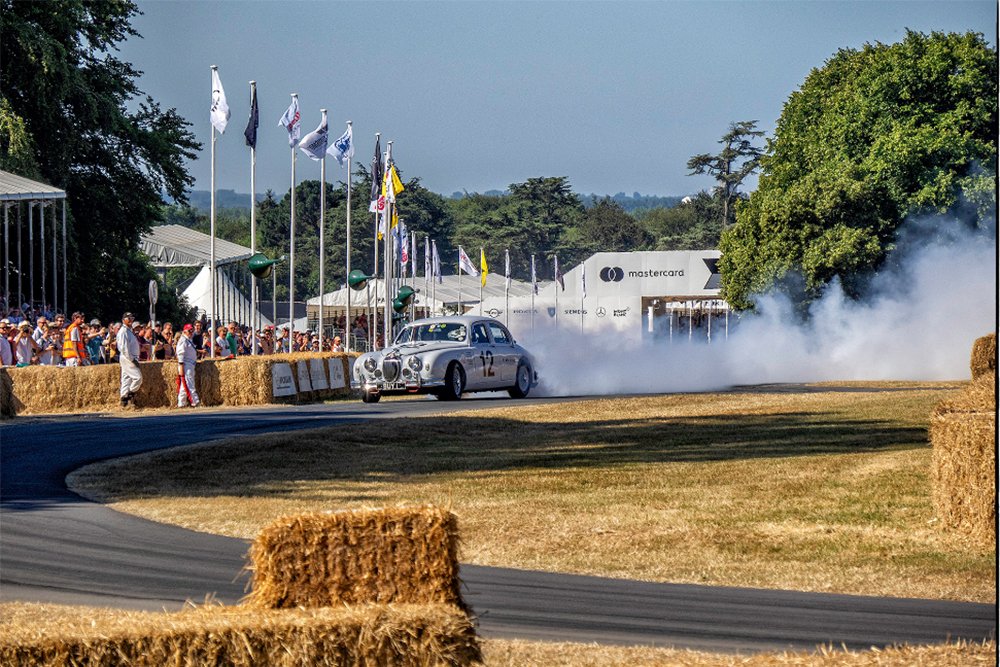 BUY1 – A car steeped in history:

Like so many successful racing drivers, Grant grew up on the edge of the circuits. His earliest motorsport memory is watching his father race a lightweight Jaguar in Canada. He says that both his father and grandfather have contributed to his success in motor racing, instilling in him a determination to continue the family’s reputation in motorsport.

Each time he gets behind the wheel of BUY1 Grant says a silent thank you to his grandfather who bought the car, one of seven modified MK1 saloons built by Jaguar for the 1959 racing season, directly from the factory.

Grant’s grandfather raced BUY1 into the early seventies, and in 1984 Grant’s father, Tony, inherited the car. He initially kept it in storage, before fully restoring it to race at Goodwood in 1998. The following year he convinced his son to take part in the event.

The car is steeped in motor racing history, but also full of family memories. Grant says he still gets goosebumps with the thrill of racing it. He’ll even admit that he occasionally closes his eyes on the grid as he waits for the green flag. He compares the feeling of stepping into the vehicle to that of settling into a comfy old sofa. But once the engine starts, all that changes. Grant says that with no power steering or power-assisted brakes it takes both strength and confidence to push the car to its limit.

The ‘Sultan of Slide’:

BUY1 has defined Grant’s racing career. Renowned motor racing journalist, Henry Hope-Frost, once coined Grant the ‘Sultan of Slide’ at Goodwood, and this sums up his relationship with the car perfectly. Asked to describe his experiences of racing BUY1 using only three words, Grant replies instantly with ‘Sideways, Smokey and Unexpected’! All that said, Grant would likely have found a place in motor racing even without BUY1. He displayed a raw talent for the sport at an early age, becoming the youngest driver to win the Jaguar Challenge Championship at his first attempt. And Grant is certainly no one-trick pony. He also races a Praga for VR Motorsport, which requires an entirely different style of driving to the one he employs when racing BUY1. 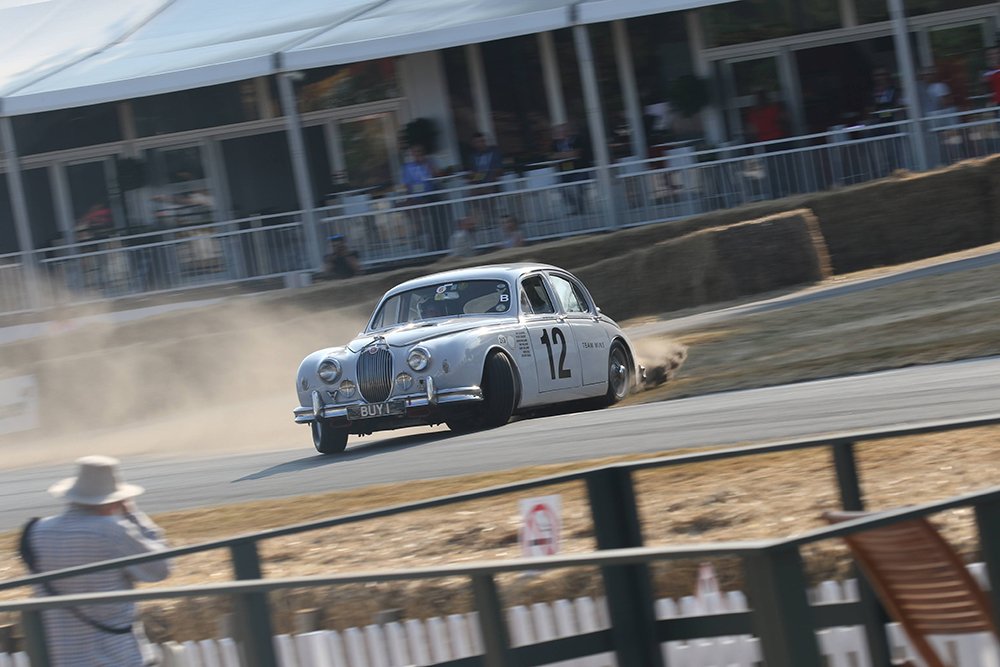 New opportunities opened up for Grant when he founded Grant Williams Racing and secured sponsors, three years ago. That said, Grant Williams Racing still remains very much a family affair. Grant says, “I couldn’t do what I do without my Dad and the rest of my family”. He continues, “My father works tirelessly on the car, and most of my family come along to help out at events. I love that we have the family involved as much now as we did when my grandfather was racing.”

It’s perhaps this continued family solidarity that is the reason Grant feels so fortunate to be the custodian of BUY1. He says, “I’ve been offered millions for that car, but I could never sell it. I’d love nothing more than for my kids to become the fourth generation of Williams to get behind the wheel of BUY1”.

Grant wholeheartedly believes that he is privileged to be a part of BUY1’s history. He loves nothing more than to share the car’s story with motor racing fans at Goodwood, Silverstone, CarFest and other events. Grant is always happy to answer questions and have his photo taken alongside BUY1. But he also modestly admits that it gives him a touch of imposter syndrome. He says, “To be honest, I’m just an average fella who runs a tyre and maintenance garage in Newport. So, I always have to pinch myself when people treat me like a racing driver.”

2020 was to be a big year for Grant Williams Racing with a full calendar of events from April to October. Unfortunately, as is the case with so many, plans have been somewhat curtailed by COVID-19. But do stay tuned to Grant’s social channels to get your fix of BUY1 where the “Sultan of Slide” is still sharing smoky moments to keep you entertained in lockdown.

We hope you enjoyed this car story. Do stay tuned for the next in our series of South Downs Secure Car Stories. In the meantime stay safe and well.

We continue to operate at South Downs Secure, if you have any questions, contact us here.