At South Downs Secure, we feel fortunate that we can share in the passion and pride our owners have for their vehicles. We get to hear some fantastic stories and meet many inspiring people.

Long before the coronavirus outbreak, we’d decided that 2020 would be the year we’d share some of these tales with you in a series of South Downs Secure Car Stories. But now, more than ever, it seems appropriate to start with a ‘Car Story’ introducing the inspirational Rich Newton. In this South Downs Secure Car Story, we share how Rich overcame adversity to continue to enjoy the motorsport he loves. 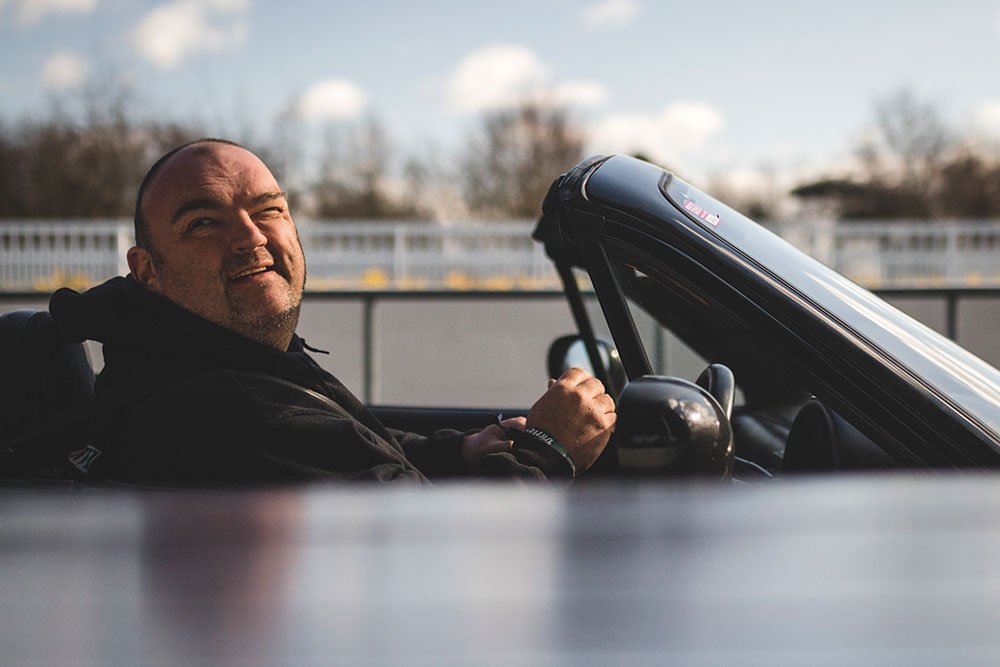 In the world of motorsport, most successful drivers start young. They’ve usually spent many a summer day visiting dusty circuits with family members. The smell of burnt rubber and chargrilled asphalt slowly tantalise their senses and quite literally gets their motor running.

Rich Newton began his car story just like this. A frequent visitor to Mallory Park, Cadwell and Donnington in his youth, it was only a matter of time before he found himself behind the wheel. His love of the track eventually developed into a desire to drift.


This motorsport originated in Japan. It was practised on mountain passes, or Touge, with sweeping ‘S’, bends. If you’ve not seen the sport in action, a driver must intentionally oversteer with a loss of traction while maintaining control and driving the car through the entirety of a corner. Rich first witnessed drifting at Silverstone in 2005 and knew he wanted a piece of the action.

Initially Rich shied away from drifting in his Nissan Skyline R32 GTS-T, opting instead for a modified Volvo 340 1.4 litre. But after a few practice sessions, Rich began to miss the power of his Skyline. So, it was this vehicle he drove in his first competitive event. The 2007 Eurodrift series at Teesside Autodrome saw Rich qualify fourth and finish sixth overall, setting the tone for his successful first season.

For the next two years, Rich continued to compete against some of the best drivers in Europe, often qualifying top in his class and with many podium places. This level of success could be perceived as reasonably remarkable for any newcomer to a sport. But Rich was also dealing with increased pain from a leg injury sustained in a 2003 motorbike accident.

Despite over thirty operations on his damaged left leg it continued to deteriorate and in 2012 Rich underwent an above-knee amputation. For many, that might signal the end of a burgeoning motorsport career. But not for Rich. A year later he was keen to get back behind the wheel. Over the next twenty-four months, Rich concentrated on having fun with his “Drift Family” rather than competitive events. That said, a few records were still broken. It was at the opening weekend of Driftland in Scotland that Rich won the prize for the highest entry speed at 71MPH, a record that still stands today.

By 2016, Rich was firmly back in the competitive driving seat when disaster struck again. On route to a drifting event, he was involved in a car crash which left his right leg severely damaged. Following five operations over six months, Rich elected to have a below-knee amputation. Although Rich describes the decision-making as easier the second time around, he readily admits that rehabilitation was harder, as was getting back into the sport he loved. Motorsport UK had just introduced new rules for drivers with disabilities. But Rich remained undeterred, and with the help of family and friends, he was driving within the year. 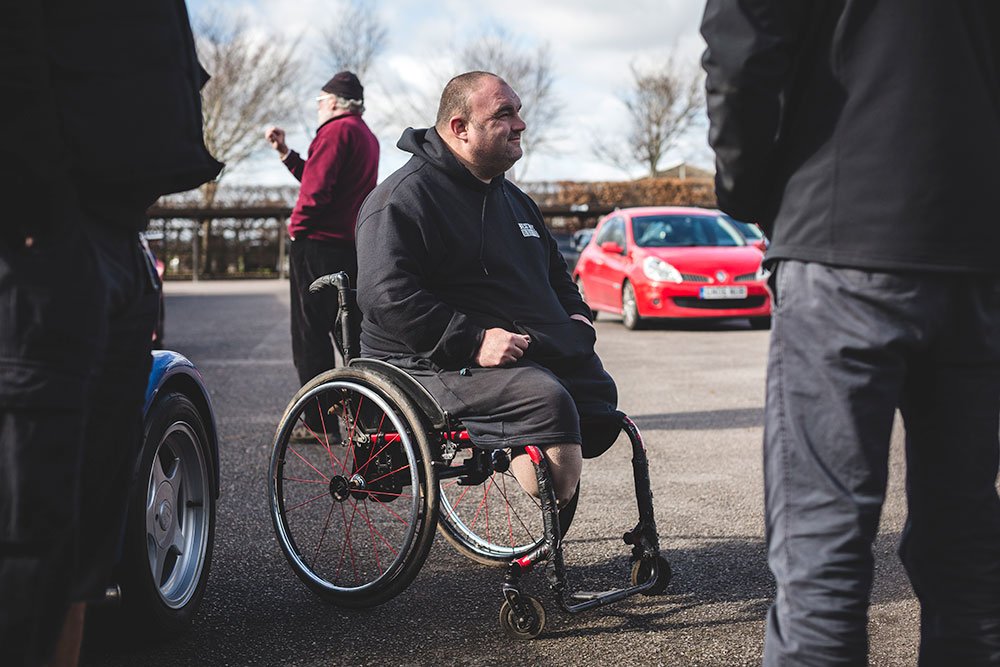 His friend, Craig Davenport, built him a car, incorporating a custom setup for hand controls that would allow him to control the manoeuvrability he needed to drift.

Rich also believes his successful return was helped by being involved with other drivers with disabilities. He credits the inspirational David ‘No Legs’ Birrell and the Team Legless Drift Team. Rich was also part of the hugely successful Team BRIT. A competitive motor racing team consisting of disabled drivers who race against able-bodied drivers on a level playing field.

Ask Rich if he considers himself to be inspirational, and he will reply in the negative. Saying, “I’m just enjoying life and motorsport with my family and friends around me.” But anybody who has met him will disagree. His strong mental attitude and refusal to quit is a constant reminder to other drivers that they can succeed in the face of adversity. 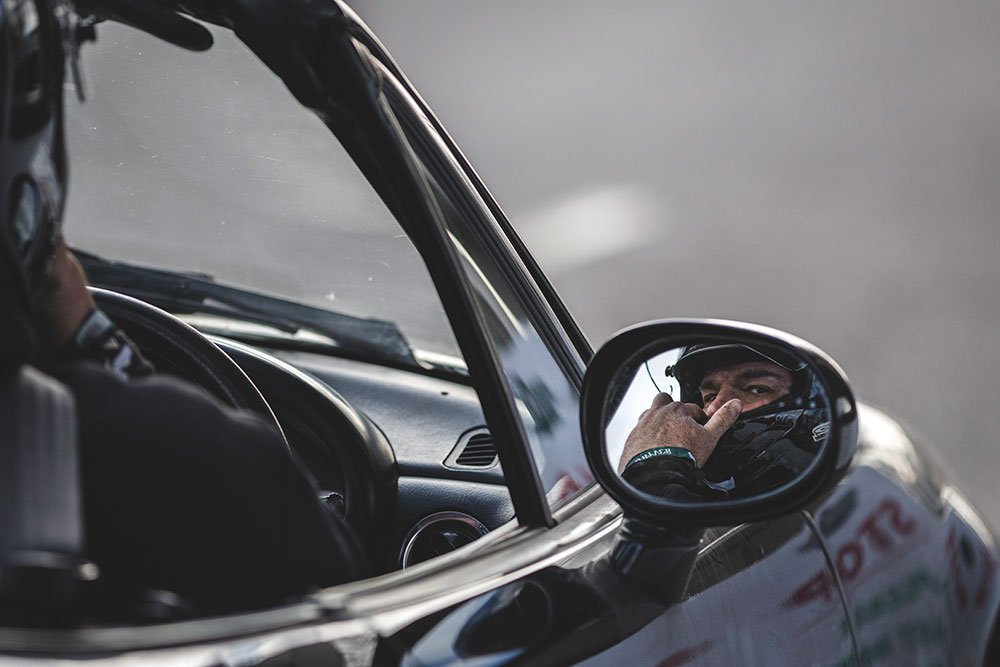 These days, Rich’s motorsport passion also includes track racing, we last caught up with him at a Misty Racing day hosted at Goodwood. A circuit Rich loves for its fast, flowing track.

From 2021 Rich is looking forward to joining Steve Kite and the crew at Misty Racing (the Official Hyundai Coupe Cup Race Team) on a more permanent basis. In the meantime, you’ll still find Rich on the drift circuit where he currently drives a Mazda RX7 FC. He hopes he’ll be taking part in the Retro Drift Challenge later in the year, (if current circumstances allow).

A wise person once said, “Life is a journey, not a destination, learn to enjoy the ride.” It’s safe to say that Rich continues to do so by skidding sideways and screaming around race tricks, doing what he does best… Inspiring others.

We hope you enjoyed Rich’s car story. Do stay tuned for the next in our series of South Downs Secure Car Stories. In the meantime stay safe and well. We continue to operate at South Downs Secure, if you have any questions, contact us here.

Our thanks to Paul Johnson Automotive Photography for the images used in this article.